On Monday, October 7, 2019 at approximately 7am, a Delta MP5000 portable barrier stopped a stolen Dodge Ram pick-up truck at an entrance gate of the Naval Air Station – Corpus Christi. The stolen car was chased by the local police onto the base.

At that point, the Air Station announced that an unauthorized person was on base and the facility immediately would go under lockdown with all gates secured to all traffic. Having taken flight after the truck was stopped by the barrier, the intruder was quickly apprehended within the hour and taken into custody by the Bureau of Alcohol, Tobacco, Firearms and Explosives. 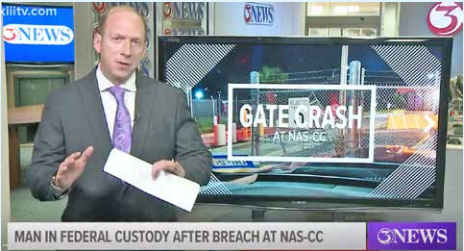 “This is the second attempted intrusion into the Naval Air Station – Corpus Christi in eight months,” explained Greg Hamm, Vice President of Sales and Marketing, Delta, “On February 14, a Delta MP5000 portable barrier stopped a stolen Ford Edge crossover SUV at the north gate. The trespasser had driven across the base to escape but crashed into the Delta unit and erupted into flames. The driver was shot and killed.”

Delta’s totally selfcontained MP5000 mobile deployable vehicle crash barriers now carry an ASTM rating as high as M50, able to stop and disable a 15,000lb (66.7kN) G.V.W. vehicle moving at 50mph (80.4kph). They tow into position to control vehicle access within 15 minutes. No excavation or sub-surface preparation is required. Once positioned, the mobile barricades will unpack themselves by using hydraulics to raise and lower the barriers off their wheels. DC-powered pumps will then raise or lower the barriers. Once the event is over, procedures are reversed and the barriers are towed away.