In recent years, a particular form of criminality has become more widespread on Europe’s major highways: the theft of valuable commercial goods, vehicles and their cargoes. The financial cost is enormous: German insurers pay an average of a million euros per business day for lost commercial goods alone. On top of this, property damage must be considered, and no less important are the threat and uncertainty felt by many drivers. Even the fuel tanks on lorries have been targeted by organised crime, and accordingly theft of fuel has become a regular cause of annoyance to drivers and hauliers alike. In recent times, the police have been called to investigate as many as nine criminal offences a week at the Theeßen Euro Rastpark on Eastern Europe Route A2. The company has recorded high crime rates elsewhere too. Respected logistics companies were even compelled to warn their driving personnel about less safe routes. The situation could not be allowed to continue, and Euro Rastpark began working with other members of the Association of German Off-motorway Truck Stop Owners (VEDA) to combat the problems by developing a security concept that addressed actual conditions.

Euro Rastpark now offers premium parking areas that are screened and monitored according to VEDA standards for lorries at seven of its truck stops. Their aim was to develop a security solution that could be implemented quickly and without prohibitive expense. Managing director Johannes Witt explains the concept, “We 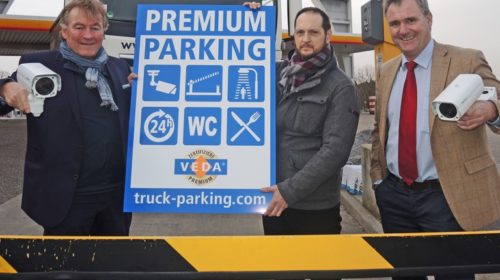 have not relied on expensive construction, but rather on pragmatic detection and deterrent measures such as restricted approach roads, the best possible lighting and complete documentation of all movements by vehicles and people.” For the full-coverage detection of all movements, they decided to use an economical and top-quality video observation solution offered by another Regensburg-based company, the technology pioneer Dallmeier.

Accordingly, DF5200HD-DN/ IR type high resolution infrared cameras have now been deployed to improve security on the approach and departure roads to the separate lorry parking areas at the Theeßen Euro Rastpark. The video system is set up so that the vehicle licence plates are clearly readable not only by day, but also in night recording mode. The video data is backed up reliably by the DMS 2400 appliance, one of the most powerful recording solutions in Dallmeier’s inventory. During the project, Euro Rastpark seized the opportunity and commissioned Dallmeier to install cameras for observing the refuelling lanes as well as the retail area and cash registers in the service station shop. In all, 24 camera systems are now operational and between them they monitor all critical areas. The 96 lorry parking spaces at the Theeßen truck stop now constitute a further precinct of safety and calm within a zone that is fully protected by video technology.

Protection for drivers and goods

The number of thefts of vehicles, goods and fuel from the secured parking area has fallen dramatically. These new security zones also mean that the drivers can work with more peace of mind, since they do not have to worry about the safety of their valuable cargoes, or even their personal safety on top of the normal cares of a demanding job. “Since we started this initiative, the number of robberies has fallen massively,” confirms Witt.

More protection and comfort for drivers, theft prevention for goods and operating equipment – video technology from Dallmeier ensures that the logistics chain does not break down on the roads and highways.