Computer storage systems have seen a massive evolution and transformation over the last 100 years or so. These changes have been dramatic in relation to the size, price and the access speed of storage. These changes have been possible due to the rapid advances in technology, which was initially slow and took years to evolve but later in the last decade it accelerated due to rapid innovations and concerted/ collaborative efforts of the industry giants. These technology advances have revolutionized the way companies, businesses and consumers use storage technologies today – from the most ubiquitous smart phone devices and personal computers all the way to businesses which now have come to rely more on cloud storage services.

In this article we try to capture the evolution of storage technologies over the years and examine the fundamental technical reason that has accelerated storage evolution over the last decade.

Storage evolution over the last 70 years

(Relative to size, capacity and price)

The table below highlights the trends in storage. Initially, the advances in technology were slow, mostly led by IBM in the 60s and 70s in the Megabyte revolution. In the 80s and 90s other companies jumped on the storage bandwagon and started the Gigabyte revolution soon to be followed by the Terabyte revolution. Today there are many physical form factors of storage devices from the traditional mechanical hard disk drives (HDD) to non-volatile memory (NVM) or solid-state devices (SSD); however, the fastest and most dynamic revolution is occurring in the cloud. 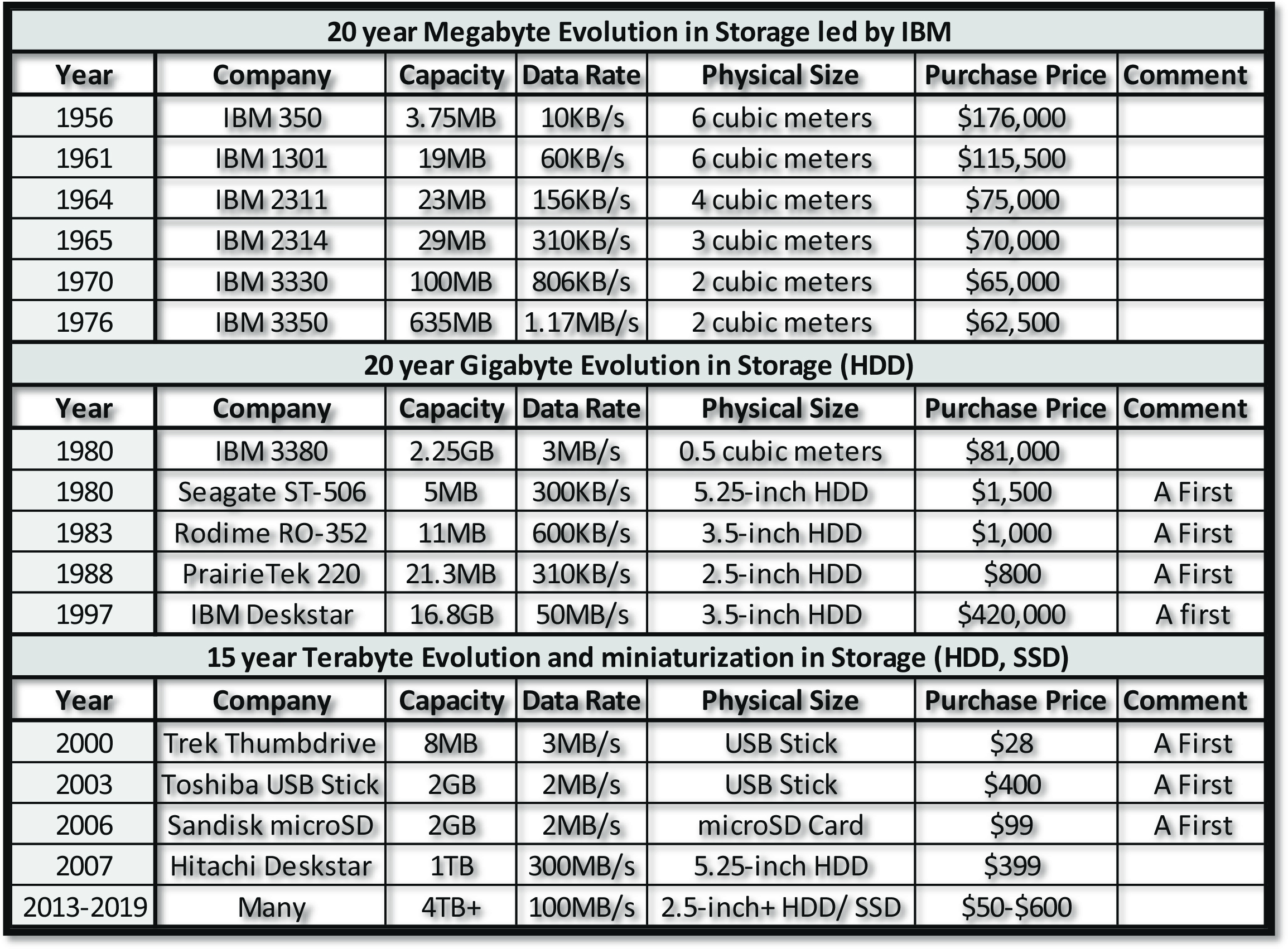 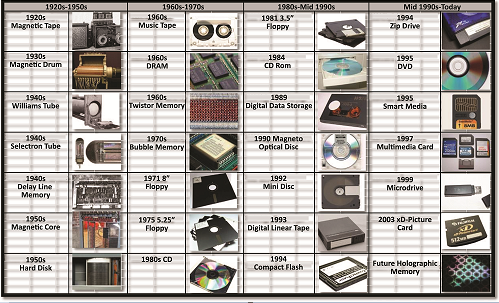 Today, most storage systems use some or the other form of a mechanical device for storage which is otherwise known as ‘hard disk drives’ (HDD). HDDs are the dominant technology for several reasons such as very high recording density per platter, more than one platter per HDD, higher rotational speeds up to 15000 RPM for enterprise class drives, and reduced costs due to economies of scale. However, they do have inherent disadvantages for the following reasons – further recording density increase has hit the limits of the physical space, increasing the rotational speed of the platter increases the cost exponentially, and being a mechanical device it is bound to physically fail due to all the moving parts. A single HDD with a single platter at 15000 RPM can at most deliver a transfer speed of 100MB/s for sequential block reads, and for the random reads for the same configuration, transfer speed drops down to as low as 10MB/s

Given the inherent limitations of mechanical storage devices and the rapid drop in prices of non-volatile memory (NVM), NVM is the next revolution in storage. It is found in almost all mobile devices and now continues to replace mechanical devices across the board. There are several reasons for this – they are now cost competitive with HDDs per terabyte of storage capacity and this price parity will continue to erode in favor of NVM in the coming years; NVM technology is far more reliable in the longer term because it has no moving parts; NVM is over 100 times faster than HDD and has similar transfer speeds for both sequential and random reads/ writes unlike HDDs; and micro-second read/ write latency compared to milli-second latency for HDDs.

Companies like Intel and Samsung have now developed NVM technologies that are 3 dimensional – it means increased storage density per cubic measure of volume without any performance degradation.

The first system implementations of NVM were found to be SSDs that use the serial ATA protocol or SATA. The reason behind this is very simple. They achieve a 100-fold increase in transfer speeds relative to HDD immediately, without changing the upper level small computer systems interface (SCSI) protocol. The SCSI protocol is over 4 decades old and is used by all I/O protocols such as fiber channel etc. All major operating systems also support the SCSI protocol. So for the industry’s quick gain, it was easy to replace the HDD with an NVM based SSD.

The next disruption was soon born because the SCSI protocol and its associated software stack were very heavy as far as execution time was concerned. The SCSI protocol overhead directly impacted latency of reads and writes which is detrimental to high performance applications such as high frequency trading, small transactions in banking, and numerous database applications for machine learning and artificial intelligence. Thus, an industry working group was formed to address the latency problem associated with the SCSI proto col. The industry came up with a new protocol which takes advantage of the native speed of NVM. They completely eliminated the SCSI protocol to define a new protocol called NVMe (Non-Volatile-Memory Express). In this protocol, the NVM device is directly attached to the I/O PCI express bus – and hence the extension ‘e’ in NVM. This eliminates the need to have the traditional hardware and firmware that resides in a host bus adapter (HBA) along with HBA itself. The following diagram illustrates this concept.

Restricting NVMe inside the box, server chassis has implications for scaling a storage system. Network attached storage (NAS) and storage area networks (SAN) do not have scaling issues. These are field proven technologies for large enterprises with each having advantages and disadvantages in certain type of applications. NVMe-o-F is now about to change the dominance of NAS and SAN storage networks. Several competing technologies are now defining new protocols to replace FC and NAS in enterprise and cloud environments. These are iWarp, FC and RoCE. These technologies intend to use existing ethernet and fiber channel networks to deploy NVMe outside the server chassis. TCP/ IP is also a very old protocol that runs over existing ethernet infrastructure and they too are in the process of extending NVMe outside the server chassis. It is only a matter of time when all storage (green field projects) adopt NVMe-o-F as the preferred storage technology. The following diagram illustrates NVMe-o-F in a CCTV surveillance application.

Data security has to do with unauthorized access to data whereas data protection has to do with computer component failure. Both these needs are to be considered as important, and must live together ‘components’ with interrelated recovery policies. As this subject is too vast for discussion, we highlight the main points here:

Storage vulnerabilities are inherent in storage systems. They include the following: