Representing the seventh statewide deployment of Everbridge in India, the Maharashtra win underscores the company’s global leadership in Public Safety and Crisis Preparedness with countrywide contracts in APAC, EMEA, and the Americas

Everbridge, Inc., the global company in critical event management (CEM) and national public safety software solutions, recently announced that the Indian State of Maharashtra selected the company’s Incident Response Solutions to help governments plan for, respond to, and recover from any disaster. Home to a combined 150 million residents and annual tourists, Maharashtra is the second-most populous state in India, and its capital Mumbai is the most populous city in the country. 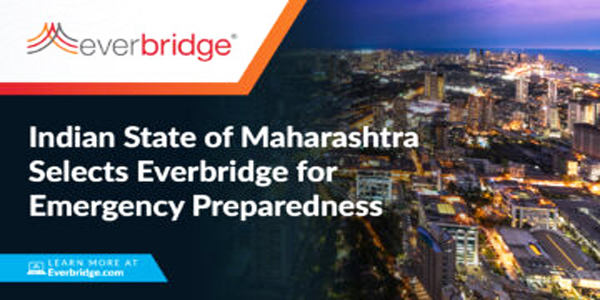 Following crises such as massive floods in 2021, Maharashtra undertook an initiative to implement an Incident Planning and Response System that would bring together stakeholders and support agencies including Police, Fire, Public Works, and Health under one platform, and to provide one common operating picture, to respond to any disaster in a unified manner. The State partnered with Everbridge to leverage its Previstar CPS to create a comprehensive incident management platform that puts their plans into action, tracks activities, mobilizes resources, and enables decision support.

“We are honored to support Maharashtra on the evolution of its statewide emergency preparedness and capacity building as the government institutionalizes an Incident Response System,” said Valerie Risk, Vice President of Public Safety Solutions at Everbridge.

Himadri Banerjee, Global Director of Everbridge’s Previstar said, “As we have demonstrated in India and in countries around the world, our public safety platform promotes effective disaster management and greater safety for the millions of people living in the region.”

The deployment of Maharashtra’s emergency/ disaster management system expands on Everbridge’s position as the global leader in population-wide Public Warning and Public Safety Solutions. More local, state, and national governments across the globe deploy the Everbridge Public Safety solutions than any other provider, offering government agencies with the ability to save time and save lives. The Everbridge platform reaches residents and travelers in more than 200 countries and territories in case of natural disasters: such as floods, severe storms, volcanic eruptions, earthquakes, and wildfires; manmade threats: such as geo-political, terrorist attacks, and industrial accidents; and digital threats: such as ransomware, cyberattacks, and IT disruptions.