A new Kaspersky Safe Kids study has revealed the most viewed children’s interests between March and May 2022. Popular events such as the Oscars were trending and there were also some changes in the gaming segment, including the growing popularity of the creepy ‘Backrooms’ game. In the music field, all fame got PSY for the track ‘That That,’ released in collaboration with BTS star SUGA.

This past spring has been full of popular events. The Oscars made headlines, many trending songs were released, and the creepy game ‘The Backrooms’ made a comeback. Children have been closely following all these events, which have influenced their interests. Kaspersky analyzed anonymized data voluntarily provided by Kaspersky Safe Kids users such as search queries, the most popular Android applications and website categories requested. 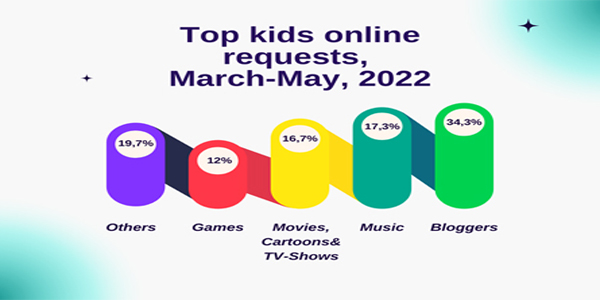 As for popular events, Will Smith’s infamous Oscars’ slap globally captured kids’ attentions and was widely discussed throughout the spring. In addition to this, Johnny Depp and Amber Heard’s divorce trial, and speculation about the Spiderman celebrity couple, Zendaya and Tom Holland, were trending pop-culture topics. Unexpectedly, children were also frequently searched UwU, which is an emoticon depicting a cute face.

The gaming section also saw some slight changes over the spring. One interesting case is The Backrooms game, which has become popular among children in recent months. It is a creepypasta (referring to horror related content on the internet) that puts the player in an endless maze of randomly generated office rooms. It includes several levels that gamers must explore. In addition, the game, ‘Among US’ has been trending downwards for the past few months, with kids losing almost all interest in it.

Music is also one of the most popular categories on YouTube. Among the top leaders was a new music video, ‘That That,’ by PSY, produced with and featuring BTS star, SUGA. Another popular newcomer was ‘We Don’t Talk About Bruno (From Encanto).’

Speaking of movies and cartoons, a lot of children’s YouTube requests were devoted to the channel, My Story Animated. This channel animates stories, claimed to be real, sent to them by teenagers. For movies the leaders were ‘The Bad Guys’, ‘Sonic the Hedgehog 2’, ‘Rock Dog 2’ and ‘Heartstopper.’

“New trends and events in popular culture have a significant impact on kids’ interests. Children’s passions change rapidly and for parents to better understand their little ones and build close relationships with them, it can be useful to explore their interests and hobbies together. Modern parental control apps are one way to help with this,” commented Anna Larkina, Web Content Analysis Expert at Kaspersky.

To ensure children have a positive online experience, Kaspersky recommends that as a parent: