The ‘Make in India’ policy was unveiled to revive the country’s ailing manufacturing sector by honorable Prime Minister Shri Narendra Modi ji on 15th August 2017 from the ramparts of the Red Fort. An impact Assessment in relation to ‘Make in India’ policy was conducted by the Ministry of Commerce and Industries (CIM) & Department of Promotion of Industry and Internal Trade (DPIIT). The Event was chaired by Hon’ble Minister of CIM Piyush Goyal and was conducted in the lieu of completion of 5 years of the implementation of ‘Public Procurement Policy – Make in India (PPP-MII).’

The Event started with the inaugural welcome speech by SRajesh Gupta (Director, DPIIT) which set the tone of the event. This was followed by a presentation on the ‘Impact Assessment Report of Public Procurement (preference to Make in India) Order, 2017’ by Ms Manmeet Kaur Nanda (Joint Secretary, DPIIT), followed by the Release of Impact Assessment Report by Hon’ble Minister.

Ministry of Commerce and Industry & DPIIT invited three organization as the Make In India success story to present their journey and experience.

The success story of Sparsh (CCTV) was presented by Sanjeev Sehgal, Founder and Managing Director of Sparsh, fondly known as the ‘Make in India Man’ in the electronics industry. Sparsh is a two-decades old first-generation company.

In 2008, Sparsh became the first firm in India to design and manufacture CCTV cameras in technical tie-up with Sony Electronics Inc. According to DPIIT’s Public Procurement Policy – Make in India, Sparsh goods qualify as Class-I type CCTV manufacturer. Additionally, they are qualified for preference under the PMA Policy.

Sparsh came into existence in the year 2002, guided by the vision and determination of Sanjeev Sehgal who wanted to establish an Indian brand in the field of security surveillance. During that time, the entire market was captured by unorganized players who were importing cameras from Taiwan and South Korea. Electronic equipment manufacturing was a dream, and no one could have thought for development of CCTV cameras domestically in India. Sparsh took this as a challenge and started making efforts in the direction of becoming the first Indian manufacturer of security surveillance CCTV cameras. After 6 years of research, patience, efforts, and hard work, when finally, the first camera was launched by Mr. Sehgal and his team in the year 2008 which was indeed a proud moment for any Indian to be the first manufacturer in his field. Sparsh as a brand made its mark in 2008. To put cherry on the top, Sony Electronics, MD, came to India to launch it.

It was just the beginning and there was a lot which had to be done to sustain in the market. With a team of handful but skilled personnel, Sparsh started converting those challenges into opportunities and started taking baby steps towards growth and success resulting in revenue growth of 11 times in 4 years from 2008 to 2012 and being ranked as overall No. 4 brand and only Indian brand in IHS Video Surveillance Report for 2014.

The key was an out of the box thinking by a leadership that had a positive thought process and performed deep market research.

Market dynamics changed thereafter, and world CCTV market started shifting from Taiwan and other parts of world to China from 2010 and was captured totally by China in short span.

The best example was the pandemic situation of Covid-19 when the entire world was locked and negativity prevailed, Sparsh converted the negative atmosphere prevailing into positive and progressive opportunity by utilizing the thermal technology for fever detection camera and other devices. This step was a boon for humanity as it benefitted numerous companies, organisations and individuals by providing contactless fever detection and early diagnosis, saving precious lives. 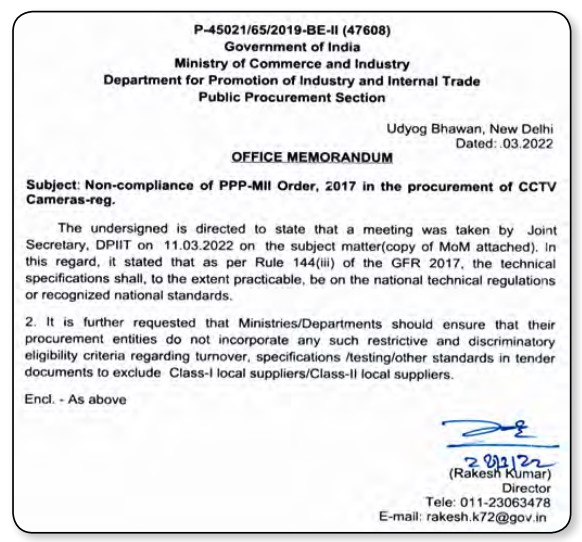 In the last 2 years, the company has grown more than three times in revenue, more than five times in profitability and has expanded from one manufacturing unit to three manufacturing units (2 units in Haridwar and 1 unit in Noida). Today, apart from its own brand, Sparsh is manufacturing security surveillance products which includes parts, modules, SKD for nine national and multinational brands. By the end of 2022, Sparsh plans to manufacture for three more global brands.

The success story of Sparsh would not have been possible without the instrumental support received from the Ministry of Commerce and DPIIT. The Ministry supported to eliminate restrictive conditions in the tenders (Government Procurement process) against domestic manufacturers. Few of the success stories worth mentioning where Sparsh got success after intervention by DPIIT were notably:

Based on the grievances raised by Sparsh, DPIIT conducted a meeting with 23 departments and ministries on 11th March 2022 and the concerns were discussed individually with each ministry. Based on those discussions, an office memorandum was released on 28th March 2022.

The result of this decision was that the Bureau of Civil Aviation Security (BCAS) accepted Indian standards as equivalent to UL Standards and made modifications in their procurement manual on July’ 2022.

The support from DPIIT and other government organizations has been a big motivation for Indian manufacturers like Sparsh. The decision created a pathway for new opportunities. Taking this as a sign of expansion, Sparsh signed an MoU with Uttarakhand Government. With the support from Uttarakhand Government, Sparsh is coming up as an anchor unit for EMC 2.0 (Electronic Manufacturing Cluster) in Kashipur, where the Company procured 8.5 acres of land with a commitment to invest `175 crores. This will generate employment for 25,000 people. Once the unit is operationalized, it will have the capacity to manufacture 1 million cameras per month which will be one of the largest CCTV manufacturing unit outside China. The USP of the unit would be that all the parts starting from molding, die casting, sheet metal, powder coating would be manufactured in-house, indigenously in line with the Make in India notion. Sparsh has set the ambition to be the ‘CCTV Factory for the World’ in security surveillance industry. In order to achieve this ambition, Sparsh has been making a lot of investments and efforts in product research and design by understanding the needs of our customers. Sparsh provides unique value proposition by customizing products as per the security requirements and global market standards.

It is worth mentioning about the key success installations of Sparsh in the last 2 years which added value to Indian Security surveillance market, namely:

Sparsh has achieved more than 70% domestic value addition through its products. Through reverse integration, Sparsh has produced the key camera components domestically and produced them locally. As of today, except the lens, all the parts of analog and basic IP cameras are being domestically manufactured.

At the event, success stories were followed by address from notable industry associations namely:

On the auspicious eve of India’s 75th Independence Day better known as ‘Azadi ka Amritmahotsav,’ Hon’ble Prime Minister Shri Narendra Modi quoted, “Yehi Samay Hai, Sahi Samay Hai, Bharat ka Anmol Samay hai,” and there would not have been a better time for Sparsh to make a mark in the world with this recognition of being India’s top Make in India success story.

In line with the vision of our Honorable Prime Minister, Sparsh aims at continual improvement of standard products as well as modernizing the products by doing granular research on product design and specifications.