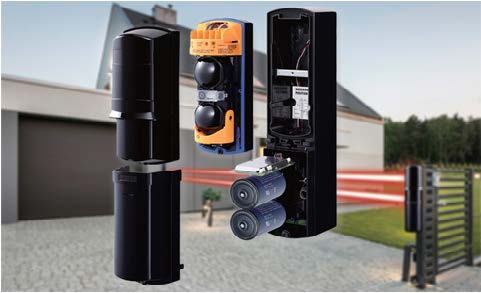 The SL-TNR series includes two models: a 30-meter SL-100TNR, and 60m SL-200TNR outdoor battery-powered active beam that is ideally suited to protect small perimeters, open areas and driveways. The sensor has been designed to work with both D-sized lithium batteries as well as the universal CR123 batteries, when using optional battery-holders (CRH-5), which are all included in the SL-TNR-CH package.

Four D-sized batteries fitted within the receiver and transmitter will provide up to five years’ operation; 16 universal batteries will last up to one year.

SL-TNR beam sensors also feature a back box that can accommodate most of the available wireless radio transmitters on the market, making it extremely easy to add a wireless perimeter alarm to an existing indoor wireless system. The optional use of a BCU-5 allows for the battery power to be shared between the beams and the wireless transmitter.

The SL-100 TNR utilises high-grade aspherical lenses and also has an anti-frost design with IP65 weather protection to improve its durability during tougher weather conditions.

Jacques Vaarre, Managing Director of OPTEX, EMEA Headquarters says, “The SL-TNR infrared beam series meets a very real need for residential and commercial perimeter security. They will accommodate most wireless radio transmitters available on the market and allow to extend a new or existing wireless alarm system to the perimeter or boundary of the premises.

“The versatile battery options give customers a number of ways to power the system depending on what is most convenient for them, whereas the hybrid and wireless options means that whatever the layout of the area, the system can always be adapted,” Jacques Vaarre concluded.