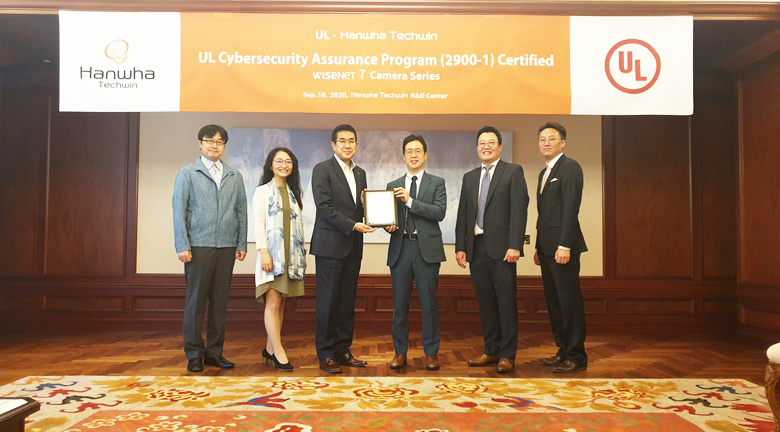 UL CAP is a certification program by UL, a leading global safety science company with over 127 years of history. The program assesses network-connectable products for the potential cybersecurity issues such as security vulnerabilities of system software and the security level against security threats.

Since the program evaluates not only products but also relevant software development processes and risk management capabilities, only a handful of manufacturers in the industry have received the certification so far. Hanwha Techwin is the only security company in Korea to acquire the certification

Hanwha Techwin obtained the certification by meeting all of UL’s thorough evaluation criteria such as penetration test, access control, encryption, and software update.

Although it is generally known that acquiring the UL CAP certification would take 8 to 10 months, it took only around three months for Hanwha Techwin. The company had been constantly working on improving its capabilities by creating in-house cybersecurity team ‘S-CERT’ to establish standardized software development processes even before applying for the program.

Hanwha Techwin’s own developed Wisenet7 cameras have embedded security solutions that can keep video data secure through all stages of product design, manufacturing and actual use.

As the popularity of network security cameras continues to rise, the importance of cybersecurity is also growing worldwide. In this backdrop, Hanwha Techwin believes that its acquiring the UL CAP certification will serve as an opportunity to reaffirm its position as a leader in the global market.

As the program evaluates the overall system relevant to cybersecurity, the certification will help with compliance to global security policies such as the EU’s ‘General Data Protection Regulation – GDPR.’

In global markets such as the US, Europe and the Middle East, bidding for projects led by governments or organizations mostly requires the UL CAP certification. In the private sector, many customers would also check the acquisition of the certification when building video surveillance systems for sensitive facilities such as laboratories and banks.