All airports face a common challenge – security. There are numerous incidents which can happen at an airport from illegal immigrants being smuggled onto a cargo aircraft, to an unauthorized vehicle smashing through a perimeter fence and colliding with an airport vehicle.

A large number of incidents are in fact linked to unauthorized access onto the airfield, either runways or where aircrafts are being loaded or refuelled posing an extremely high risk. 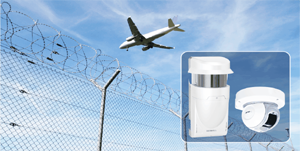 In setting up a perimeter protection solution for airports, a multi-layered approach can be used setting different areas and starting beyond the perimeter fence to warn, in advance, of a potential threat. The second area to protect is the actual perimeter fence, where a combination of multiple sensors and technologies is common providing a double or even triple confirmation of an alarm. While this is more effective to ensure no intrusions are missed, the huge level of information presented can become a hindrance, rather than a help.

This common scenario for many airports was the trigger for Genetec to develop its Restricted Security Area (RSA) Surveillance module as an extension of its Security Center platform. It has been designed specifically with a view to providing wide area protection and integrating with wide area surveillance technology, including radar and laser detection devices.

The solution allows security staff to determine the level of threat for each area, map them, and utilise OPTEX technologies to identify and locate quickly and precisely the point of intrusion. For instance, with Fibre optic fence sensor, zones can be 100m-200m long and will identify people cutting through a fence, crawling under or climbing over. Newer fibre technologies provide point location.

A particularly intelligent feature of the system is its ability to ‘fuse’ data (known as ‘target fusion’) coming from multiple sources and confirm an event as a single (i.e., the same) activity rather than a multiple threat. This presents a more meaningful picture to the operator and serves to maximise the benefit of each sensor’s performance characteristics.

Thanks to further integration of Genetec’s RSA with OPTEX’s LIDAR laser scanning detectors, an intruder can not only be detected pinpointing the exact location, but also tracked precisely feeding the X and Y coordinates and guiding cameras across different zones so the intruder can be intercepted faster by the security authorities. This deeper integration of OPTEX’s Redscan Series into Genetec’s RSA platform enables intelligent tracking and event categorisation for both vertical (virtual walls) or horizontal detection areas, making it a very precise security system.