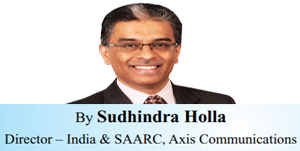 This white paper discusses radar technology in security applications, and compares it with other available technologies. It also provides specific information about AXIS D2050-VE Network Radar Detector, its usage and its possibilities

Radar is a well-established technology for detecting objects. It was developed for military use in the 1940s, but is now widely used in civilian applications, for instance weather forecasts, road traffic monitoring, and collision prevention in aviation and shipping.

Using radar technology for detection can reduce the number of false alarms and increase detection efficiency in conditions with poor visibility.

AXIS D2050-VE Network Radar Detector is Axis’ first available radar-based motion detector. Owing to its advanced tracking algorithm, it is not only an affordable complement to security cameras, but it can also add valuable features to a surveillance system.

A radar device transmits signals consisting of radio waves, or electromagnetic waves in the radio frequency spectrum. When a radar signal hits an object, the signal is reflected or scattered in many directions. A small portion of the signal may be reflected back to the radar device, where it will be detected by a receiver. The detected signal provides information that can be used to determine the location, size and velocity of the object that was hit.

Why use radar in surveillance?

Due to its superior detection abilities in darkness or fog, a motion detector based on radar can be a cost-efficient complement to other types of surveillance.

By nature, radar surveillance is not dependent on visibility. Darkness, fog, or even moderate rainfall does not impair the detection abilities.

There are other surveillance technologies that may also work in such conditions, for example thermal cameras equipped with video analytics, or PIRbased (passive infrared) motion detectors. However, surveillance based on radar can be a cost-efficient alternative to both solutions. Radar is easier to use, and more affordable than a thermal camera. Radar can also provide more information, at a longer range, than a PIR motion detector.

Reducing the number of false alarms, while maintaining the detection efficiency of real incidents, is essential in surveillance. For example, alarms are often used to trigger a video recording. In case a forensic search would be needed in alarm-triggered recordings, it could be very time consuming to go through the recorded material if there were many false alarms.

Motion detection systems often use video analytics applications that are triggered by a certain amount of pixel changes in the surveillance scene. Unnecessary or ‘false,’ alarms can typically be caused by effects such as moving shadows or light beams, small animals in the scene, rain drops or insects on the camera lens, movements caused by the wind, or bad weather.

A detection system based on radar will only detect physical movement in a scene, ignoring purely visual effects such as shadows or light beams. Radar signals should also be generally less affected by rain or snow. In both radar detection and video analytics, it is possible to design the system so that small or swaying objects can be filtered out, as well as certain zones of irrelevant movements caused by, for example, wind in a tree.

A motion detector based on radar, exclusively, will not provide any visual confirmation. To efficiently identify the cause of an alarm, or to enable identification of individuals, the scene should also be monitored by a video camera.

To add further value, rules could be established that state that only when both the video camera and the radar detector detect motion in an area will a motion detection alarm be transmitted to the operator or central monitoring station, along with detailed information about the object in motion. Such a collaborative validation can reduce false alarms even further. 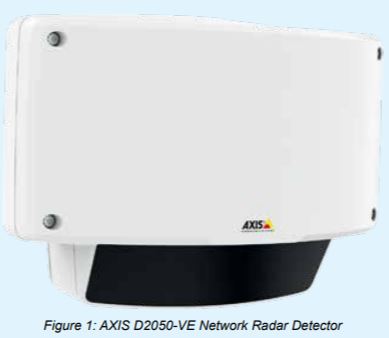 AXIS D2050-VE network radar detector is Axis’ first available radar-based motion detector. It can serve as an affordable complement to security cameras in medium-risk installations, improving detection in challenging conditions and minimizing false alarms. Owing to its advanced tracking algorithm and the positioning information it provides, the detector can also add new features and value to a surveillance system.

One radar detector unit provides accurate detection within a range up to 50m (164ft), within an angle of approximately 120 degrees. For coverage of a larger area, it is possible to use multiple detectors. Typical mounting height should be 3-4m (9-13ft).

AXIS D2050-VE can be used as a stand-alone product, but may serve its purpose best as a complement to a camera that also provides a visual view of the scene.

In order to facilitate a visual interpretation of the scene, the radar image as it is seen in the user interface can be easily integrated and calibrated with an uploaded reference map.

The detector can be treated like a camera in the security system. It is compatible with major video management systems (VMS) and common video hosting systems. The detector comes with Axis open VAPIX interface enabling integration on different platforms.

Typical installation scenes include fenced-off areas such as industrial properties or roofs, or parking lots where no activity is expected after hours. However, the detector’s advanced filtering and tracking function makes it valuable in most environments.

Figure 2 shows a parking lot as monitored by the network radar detector and shown in the user interface. The radar image has been combined with a reference map of the scene. 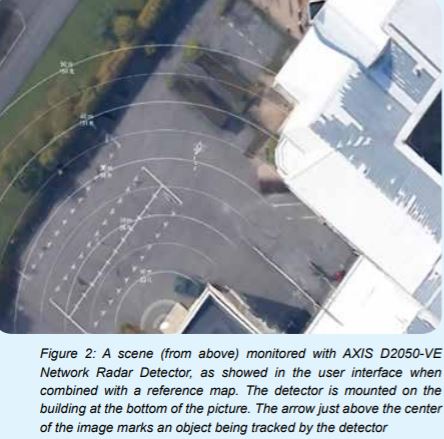 The network radar detector comes with an intuitive user interface where the user should draw one or more ‘include zones,’ and possibly ‘exclude zones,’ within the detection range.

Detection and tracking of objects takes place continuously within the whole detection range. However, owing to its filtering functionality, the detector will trigger actions only on objects detected within an include zone. The filter can also be set to ignore certain object types, and only trigger on, for example, large objects, only vehicles, or objects that have been tracked for a certain amount of time.

There will be no triggers in areas outside of the include zones. Nonetheless, exclude zones can be placed within an include zone, as a tool for avoiding triggers in, for example, a particularly busy area with objects that may cause false alarms. Data from the immediate proximity of the detector, however, is disregarded by default, which means that neither water drops nor insects on the detector surface will cause any false alarms.

Figure 3 shows the same scene with reference map as before, now with multiple zones inserted for enabling different triggers. The detector can be configured to, for example, prompt a video camera recording upon detection in the light yellow include zone, and trigger the lighting of a deterring lamp upon detection in the dark yellow include zone. In the red exclusion zone, however, no triggers are desired. Note that the zone colors used here only serve as examples. 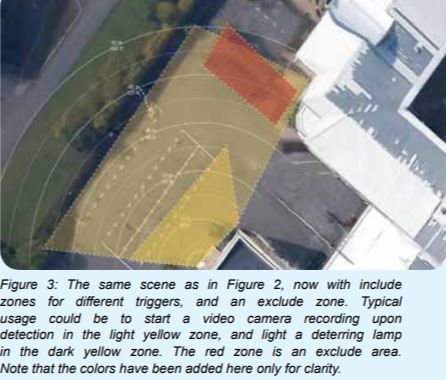 By measuring the time delay, phase shift, frequency shift, and signal strength of the reflected signals, data on a moving object’s location, speed, direction, and size is obtained.

The data is then processed by the detector’s advanced tracking algorithm, tracking and classifying the object. Since each object will usually cause multiple reflections, the algorithm groups the reflection data in clusters, representing the objects. It collects information about how the clusters move over consecutive time frames (the radar module sends ten data frames per second) to form tracks. After applying a mathematical model of motion patterns, ‘filtering’ the data, the algorithm can determine which category the object belongs to, for instance human or vehicle.

The mathematical model applied can also predict the object location if needed, for instance, if the radar should miss a frame or if noise disturbs the measurement. The tracking algorithm thereby makes the radar detector more robust against noise and faulty measurements.

AXIS D2050-VE Network Radar Detector offers a variety of possible uses and applications. Ready-to-use features include action rules for different types of triggers, PTZ auto-tracking functionality, and as discussed before, filtering of areas with the include/ exclude zones. Owing to the open-platform metadata that the detector provides, it will also be possible for third-party developers to create their own applications.

The radar detector can be set to trigger different actions upon a detection. For deterrence purposes, for example, it could typically switch the integrated relay to light a lamp or play audio on a connected speaker, or start a video recording and send alerts to security personnel. The tracking function can ensure that this rule is only applied when a detected object has been categorized as, for example, a human or a vehicle.

AXIS D2050-VE can be used for PTZ (pan-tiltzoom) auto-tracking. Detection by the radar will then automatically trigger a connected PTZ camera to pinpoint and follow the detected object. The auto-tracking functionality is possible because the radar detector provides the exact geographical location of the object.

Continuously updated (ten times per second) positioning information is provided from the detector. This is done through an open metadata stream, compliant with the ONVIF specifications where radar-specific information such as position and velocity has been added as an extension. Third-party developers can use this information for creating their own applications for, for example, cross-line detection or speed monitoring. It is also possible to configure the radar detector with its world coordinates and line of direction to be able to visualize the detections in real time on a map.

As with all types of detectors, there are circumstances where the network radar detector’s performance may be less than optimal. This section mentions some known limitations.

Detection performance gradually decreases with distance and angle. Small objects are therefore less detectable at longer distance and at larger angles, even within the 50m (164ft) and 120 degrees range. 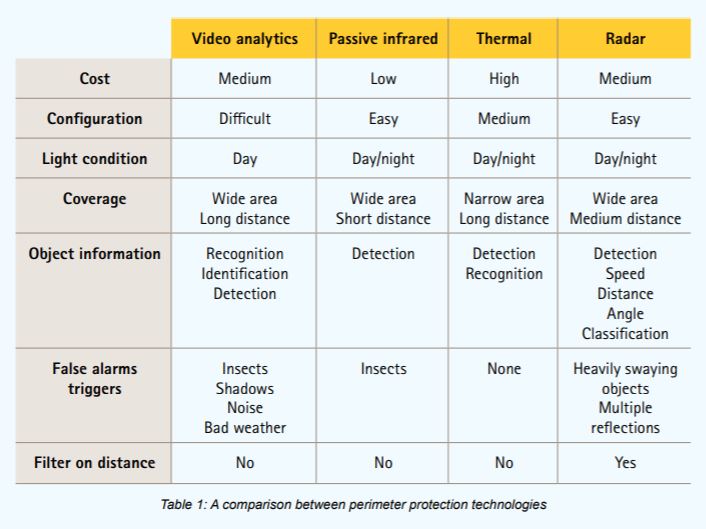 Even though the detector can filter off swaying stationary objects such as trees and bushes, they may still cause false triggers in very windy weather or sudden gusts of wind. Vegetation may also limit the detection efficiency of very slow-moving objects.

Also, in scenes with a lot of reflecting objects such as vehicles and buildings, the multiple reflections of the radar signal may trigger false detections.

Since the network radar detector cannot measure high velocities, it is not suitable for traffic surveillance.

Manufacturers of radio equipment that emits electromagnetic fields (EMF) must ensure that their products comply with applicable exposure limits, as formulated in international standards and regulations. Radar products from Axis are defined as short-range devices (SRD) with limited electromagnetic power and range. They fulfill the requirements regarding EMF safety.

There is no single technology that is ideal for all installations. Table 1 provides a comparison between surveillance technologies, including radar, taking multiple factors into account.

As the comparison shows, radar surveillance introduces new possibilities. It provides a different type of object information, including position and velocity, compared to the other technologies, and it also comes with the unique option to filter on distance (using include/ exclude zones). However, for optimal surveillance it is recommended to combine more than one technology and let them complement each other, since all technologies have their strengths and limitations.