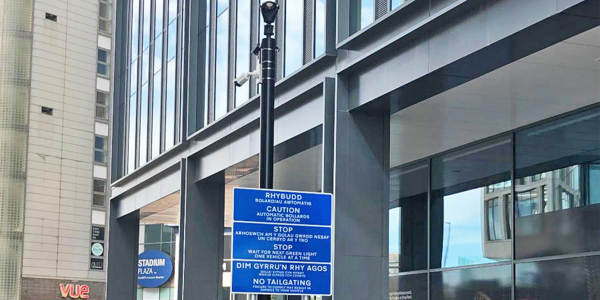 When CK Communications was asked to upgrade all of Cardiff’s traffic control rooms from analogue to IP, they called on video transmission and networking experts AMG Systems to help move video and data to more than 30 separate monitoring locations across the city.

Cardiff-based CK Communications has a 22-year history and offers a unique service integrating CCTV, RPS, VMS, fibre, security and electrical services from design stages through to installation and commissioning. The company’s projects include city centres, council-owned buildings, data centres, motorways and tunnels and it works closely with the main roads agencies in South Wales to provide support on their current and future projects.

When CK won the contract to upgrade all traffic control rooms in Cardiff from analogue to IP, it faced a significant task. These monitoring stations include four main and no less than 27 remotely sited control desks across the city. The control rooms and desks are required for the use of police, urban traffic control (which has responsibility for traffic signals across Cardiff), a Silver Command post for major events including monitoring large-scale football and rugby match days, tunnel service buildings, bus depots and more.

According to Ian Jones, the existing Cardiff traffic monitoring network was very much in need of an upgrade. He describes it as formerly ‘an analogue beast.’

“It meant there was lots of video switching, and video matrixes dotted all over the place,” Ian said, “Our first task was to get all of those camera images from the analogue world on to an IP solution. The products to be used were Pelco, but then we had to send 500 images around the city from a variety of locations to different control rooms. So that’s where AMG came in.”

“That involved utilising lots of Layer 2 switches, as well as fibre switches which are dotted across the city now,” he said, “A significant factor in the installation was that the existing Pelco equipment was only able to unicast a certain number of images; they prefer to use multicast. So AMG provided switches for multicasting (including IGMP and IGMP snooping) and other specific jobs.

“Those AMG switches help to send data – including video and audio – to all of the various control rooms and control desks across the city.”

CK has also moved Cardiff’s analogue cameras to IP, which has involved using AMG transmission equipment at the edge of the network, integrating into switches CK has built into the nodes.

The AMG equipment in use in Cardiff includes AMG 5900 hybrid units, which are able to transmit analogue video, data, audio and Ethernet, a variety of edge-of-network managed and unmanaged switches, 10Gb/s managed switches, both standard and modular, and hybrid (analogue over IP) wireless links.

Ian is himself an experienced highways engineer and has been responsible at CK for projects in Cardiff for more than a decade. His first exposure to AMG’s products came about when working on upgrading camera sites on the M25 motorway.