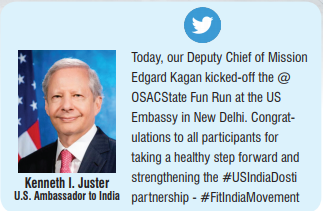 The Overseas Security Advisory Council (OSAC) New Delhi Chapter, US Embassy has been working towards fostering the public-private partnership between the US government, USA MNCs and local regional stakeholders. In continuation thereof, post a successful corporate social responsibility (CSR) run organised in 2016, the Council of OSAC New Delhi organised a Diplomatic Security (DS) Run on 19 October 2019 as an inclusiveness in diversity initiative at the USA embassy under the guidance of Gregary Levin, Senior Regional Security Officer (SRSO), US Embassy, and his office. This was also in line with the vision of Edgard D. Kagan, Deputy Chief of Mission (DCM), US Embassy to bolster US-India ties with the aim to work together for a better and fitter planet. Additionally this run does complement Indian Prime Minister Narendra Modi’s campaign for a fitter India.

The CSR activity involved inviting around a hundred of underprivileged children from grades VI to XII belonging to a small government school based out of a remote village at a place called Jhajjar in Haryana. The school is adopted and supported by the event sponsor Peregrine which is a part of the Tenon Group under the leadership of their MD – Manjit Rajain. The run also had active participation of the faculty members of the Amity International University and their MBA students along with the OSAC members, their families and US officials who joined the DS Run over 3 and 5km formats.

The daybreak run route around the diplomatic area surrounding the American Embassy was engulfed in a sea of purple T-shirts. Over 550 participants including the school children outshone everyone in stamina as well as enthusiasm and interacted freely with the SRSO Gregary Levin. The run followed community bonding over a healthy breakfast.

The DS Run was a well stitched event hosted by the US Embassy and OSAC Delhi Chapter in partnership with Peregrine to support the mission of fitness and healthy collaboration.