New Delhi saw a glittering ceremony to mark the inauguration of the world’s famous International Conference on Cyberlaw, Cybercrime & Cybersecurity – the only authoritative conference in the world which looks at the intersection of cyberlaw, cybercrime & cybersecurity. Justice Gita Mittal, Chief Justice, Jammu & Kashmir High Court inaugurated the event. In her inaugural address, Justice Mittal highlighted the significance of internet for societies, and its massive misuse that is emerging across the world. She particularly underlined how internet is being used to target the sovereignty of countries which is emerging as a big trend, which needs to be appropriately addressed. She focused on the tremendous increase in cyber terror and cybercrime cases and advocated the need for judiciary to adopt more proactive approach towards cyberspace related issues and challenges. 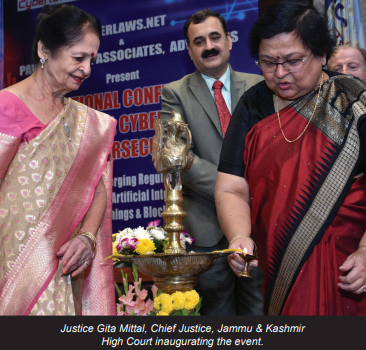 Referring to the main theme of the conference being ‘Tackling Today’s Emerging Regulatory Frontiers – Cyber Security, Artificial Intelligence, Internet of Things & Blockchain,’ she stated that there is a new judicial mindset to deal with newly emerging technologies like artificial Intelligence and Internet of Things; however, the Indian judiciary can lead the way. She complimented the work done by the International Conference on Cyberlaw, Cybercrime & Cybersecurity and its Director Dr. Pavan Duggal who is a pioneer in the area of cyberlaw, cybersecurity law and artificial intelligence law, and who is a foremost global authority on cyberspace legal issues.

In the first session, Dr. Pavan Duggal spoke about the evolving legal landscape towards cyberlaw across the world, and highlighted the distinctive new trends in cyberlaw jurisprudence and how there is a need for addressing the same. He specifically addressed the need for expeditious evolution of norms of behavior in cyberspace. He explained how distinctive national approaches on cyber security can become a predominant approach for regulating security and why there is a distinctive need for international common denominators to deal with cyber security regulation at global level. He cited various legal challenges that emerging technology like artificial intelligence has brought forward to the world at large.

The conference had different sessions on cyber security, cybercrime, regulating artificial intelligence, freedom of online speech, digital identity and 5G on the first day. The subject ‘freedom of speech online’ attracted conspicuous attention since most of the stakeholders are concerned about their freedom of speech and expression, and they don’t want it be unduly regulated to stifle the enjoyment of their civil and other digital liberties.

The remarkable capacity of the conference was its unique multi-stakeholder approach where attendees saw different stakeholders from different verticals coming in – deliberating, discussing and analyzing not just the present trends but also the future that are going to emerge on the horizon, and how appropriate proactive approaches need to be adopted in that regard. 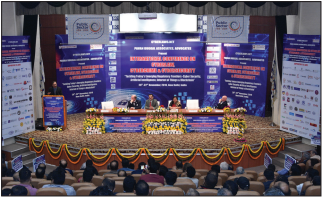 The second day highlighted the emerging trends of cyber sovereignty and data localization and why there is a need for nations to come up with approaches to protect their own data. The conference specifically talked about darknet, protection of sensitive personal data, fighting to preserve privacy online, the issue of fake news, and topic of social media abuse, and also about the potential approaches that can be adopted to prevent such misuse in India. The forum also discussed norms of behavior in cyberspace, General Data Protection Regulations (GDPR), Quantum Computing, protecting children and women in cyberspace, attribution, self-regulation, international cooperation in cyberspace matters and cyber citizenship.

The valedictory session of the conference was chaired and addressed by Justice Anup Bhambani, Judge, Delhi High Court. He highlighted the significance of the like conferences and the need for coming up with proactive approaches so that the judiciary can appropriately address nuances pertaining to cyber disputes.

The session was also addressed by Dr. Gulshan Rai, Former National Cyber Security Coordinator, Government of India. The conference came up with an ‘outcome document’ with various recommendations on various sessions of the conference.