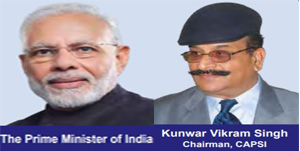 Just two months after the accomplishment of the private security industry (PSI) whereby private security services (PSS) were declared an ‘essential service’ during COVID-19 regime, the industry has set forth for a next pursuit. Kunwar Vikram Singh, Chairman, Central Association of Private Security Industry (CAPSI), has recently written a letter to Narendra Modi, the Prime Minister of India whereby he sought that the private security services in India should be declared a ‘tax-free service.’ He said that it is the basic and fundamental duty of the Government to ensure every citizen of the country safety, security and the sense of being secured; and to make a citizen feel so it must provide adequate internal security infrastructure.

The Chairman argued that security and safety are of paramount significance. The Government creates police and paramilitary forces to respond to the security and safety situations of the citizen; however, it does not send invoices to people for availing such services. Owing to the fact that there is a very low police-public ratio in India, there are huge gray areas where citizens are forced to protect themselves and their assets by retaining the paid services of private security agencies. This need of paid security services is experienced as they don’t feel secure due to various prevailing factors. That sense of insecurity created a fear psychosis among the citizens that forces them to buy private security at a cost. These circumstances bring us to a conclusion that the government internal security infrastructure is not adequate enough to grant ‘right to security’ to every citizen. This gap needs to be addressed post haste. Such an inadequacy of government services must be compensated by the State by paying for the additional security services needed by its citizens.

Kunwar Vikram Singh said that this huge expense may not be possible for an already burdened government, but it should not be levying a Service Tax to those who should have otherwise been protected by the government itself. Private security agencies, which are, to a large extent, filling the void in the internal security environment due to the lack of government forces are actually saving the government exchequer huge money which would otherwise have been used in raising more police and paramilitary forces. People pay for the security services and take away financial burden off the government for raising more battalions of Police and Paramilitary forces. Considering this huge savings, the Government must not charge Services Tax for the services which they are duty bound to provide.

Kunwar Vikram Singh sought that in order to create goodwill among its citizens post Covid, the private security services should be declared ‘tax free’ so that the consumers of the private security services will be hugely benefitted and such services will become more affordable. Majority of these services are now being availed by lakhs of resident welfare associations (RWAs) and small, medium enterprises (SMEs).

He concluded that a delegation of CAPSI shall soon meet the Prime Minister to discuss the merits of this approach.