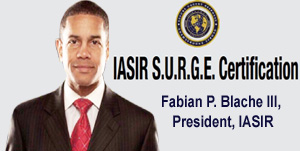 The origins of the International Association of Security and Investigative Regulators (IASIR) were formed in the United States in the spring of 1993. The objective being to enhance the ability to regulate while simultaneously promoting the professionalism of the private security, and private investigative, alarm and related industries. One of the principle goals outlined 27 years ago was to assist the industry with training and education standards. The area of greatest focus has been within the realm of private security. Various throughputs have emerged over the years, but none has been quite as significant as IASIR’s Secure Urgent Response Global Endorsement (S.U.R.G.E.) Certification™. To understand how S.U.R.G.E.™ fits into the future of private security, one must look at the industry as a whole.

The vast majority of the entire world sleeps under the protection of security officers twenty-four hours per day. According to an older issue of Forbes Magazine, “The sector experienced huge growth in recent years and today there are an estimated 20 million private security workers worldwide while the industry is worth approximately $180 billion. That is expected to grow even further to $240 billion by 2020, greater than the GDP of 100 countries including Portugal, Romania and Hungary.”

The job is well known – to protect life and property, assure public safety, support police agencies who are stressed to the maximum, create a sense of omni-presence, and to read, react and deter etc. Employ the best possible candidates and deploy the best possible technologies. This holds true for site security, protection of VIPs, and the ever-present cash in transit (Armored Car) services the world over.

The Guardian once referred to the security industry as ‘the industry of inequality’ in a piece discussing the obsession with private security. It is true that private security officers outnumber police officers. It is an investment of significant magnitude, but one that pays huge dividends by mitigating exposures to millions of crimes each day. The proliferation of security officers is so significant and commonplace that people literally do not even notice their presence most of the time. “You stop noticing it – there are guards everywhere,” said Rita Abrahamsen, a Professor at Ottawa University.

This is also true in India. A country that is arguably the leader when it comes to the sheer numbers of security officers employed in the industry. Presently hovering somewhere around 9 million guards and 23,000 companies, India requires training and licensure much like anywhere else in the world. Private security is as necessary and commonplace as it comes. Take into consideration that India’s GDP is ranked sixth by the International Monetary Fund, World Bank, and United Nation alike. This demonstrates that India is a global powerhouse. Despite the fact that China is three rungs up the GDP ladder, the number of guards in India dwarfs even China, who break up their statistics by those who are employed by the public security bureaus (PSB) versus those managed by PSBs.

IASIR recognizes India’s position in the world, and has partnered with the Central Association of Private Security Industry (CAPSI) and the Indian government to bolster CAPSI’s efforts and accomplishment in the establishment of training standards. This is particularly so with respect to overcoming obstacles and barriers during times of need.

The United States and its global counterparts, who make significant use of the private security sector, have long struggled with matters concerning reciprocity, portability, compacts and licensure through endorsement. These are all different ways to talk about proposed solutions to barriers that exist when trying to remain compliant with licensure and certification laws from one jurisdiction to another. It is all quite complex, and each different approach to the problem has its pros and cons. Ultimately, license holders need to be able to function lawfully and professionally in jurisdictions other than their credentialing sources of origin. Be them states within nations, regions within countries or from country to country.

A surge event is an incident in which the ability to provide and sustain essential services is either impacted or stressed by an over-usage of locally available resources. This could be fire, police, EMS, medical, pharmaceutical delivery and a host of other capacity-driven functions. The same holds true for private security – which is a go-to resource when local law enforcement is stretched beyond capacity, yet the need to protect is not only present but elevated.

During an all-hazards or other surge type event, regulations are often relaxed through designated disaster preparedness clauses in local laws. These are typically tethered to some sort of government declaration that possesses the authority and contains the requites language to deviate from standard licensure protocols. This can occur at a municipal, local, state, or national level depending on the construct of the government. The persisting aspect of this relaxation of licensure laws and rules is the disparity between states, provinces and countries with respect to training requirements for line-level security officers, and their impact on a license or registration holder’s ability to surge in and work during the designated preparedness/ response time-frame.

I ASIR is uniquely positioned to facilitate a substantive change to the ongoing problem of security professionals being land-locked during disaster declarations solely based on perceived or real differences in training. While each jurisdiction is responsible for regulating the practice of private security within its borders, IASIR has developed and administers an international certification program for candidates and their employers to ensure they have the mobility to go wherever their career and emerging events takes them. This certification takes the form of company and individual designations.

First, a company that meets established criteria that is tailored to their local laws and rules, can become a S.U.R.G.E.™ certified company during the first three years of the lifecycle beginning in 2021. Here is how it works. A company seeking certification from IASIR will furnish proof of all requisite documentation, on an application in the IASIR S.U.R.G.E.™ portal. Once the nominal fee for certification is paid, IASIR reviews the application and the documentation to determine eligibility. If eligible for certification, IASIR will award the designation of S.U.R.G.E. Certified™ Company to the applicant. A certificate, code of conduct, and other materials in the form of document badges for use on the company website and in correspondences will be furnished. Each company will have a designated S.U.R.G.E.™ portal account number and access to all the individuals affiliated with the company who hold individual S.U.R.G.E.™ Certifications. The designation expires every three years, from the date of issuance and renewal of the company certification will be contingent upon having 51 percent or more of employed security officers individually S.U.R.G.E. Certified. The renewal fee for company certification will be the same of the initial fee in the inaugural time, subject to change only by IASIR’s board of directors.

Of interest is the fact that IASIR’s technology partner, who provides the web-based infrastructure for the certification portal, is none other than Dr. Abraham Kumar who’s family heralds from India. His company, ProtaTech, Inc., is based in Dallas Texas and anchors the efforts of IASIR through a variety of technologies to include SORT™, EventKeyz™ and S.U.R.G.E.™ online certification training. Kumar’s experience in the security industry as a chief technology officer, and surge event manager, have effectively blended the disciplines of security and training in a very synergistic manner.

Individuals seeking S.U.R.G.E. Certification™ will do so via the same portal that is powered by ProtaTech™. However, individual certifications will be issued upon successful completion of a course of study that is tailored around local laws and training requirements – to avoid excessive redundancies in training to achieve the designation. At its base construct, S.U.R.G.E. Certification™ will be tiered in levels affording line-level security officers an attainable entry point to certification. In India, this will be done with two levels and a series of endorsements for homeland security professionals and upper-management level personnel.

Unlike many other existing security industry certifications, S.U.R.G.E.™, was designed and created with the guards in mind first and foremost. S.U.R.G.E. Certification™ is not just window dressing. This training method was designed to inform, educate and operationalize knowledge – rather than the long-standing traditional approach academic of gauging aptitude.

IASIR S.U.R.G.E. Certified™ security officers are required to attain 100 percent on the final exam at each level; however, this is made achievable by using what I refer to as a remedial loop. Each student/ certification seeker will create a profile in the S.U.R.G.E.™ portal , where they will begin their certification training online. Various checkpoints along the linear path will help officers commit the material to memory. Upon final examination, the portal will identify where students got wrong answers and will present the missing components back to them with the answer bank randomized until they have successfully responded to all of the questions correctly.

In this way, we assure that every individual scores 100 percent, which means that they have internalized the information in a way that will allow them to operationalize the training in the field. This is a stark contrast to other processes used in the more upper-echelon focused certifications elsewhere.

Certified officers will renew every two years. The designation is not cost-prohibitive, and the benefits over time will be insurmountable. With IASIR establishing MOUs in the U.S., South Africa and India, and with talks ongoing to hard-code S.U.R.G.E. Certification™ into existing laws and declarations, IASIR is solving the problems associated with reciprocity, portability, compacts and licensure through endorsement. It is through this kind of forward thinking, and leveraging online modalities as vehicles of training delivery, that IASIR steps squarely and permanently into the space it carved out for itself and world 27 years ago. IASIR is also developing companion training and certification programs for private investigators, alarm installation and monitoring personnel, and a certification for regulators.

Through our relationships with Chairman Kunwar Vikram Singh, and CASPI, security professionals in India will rapidly become some of the earliest adopters and beneficiaries of our solutions to long-standing barriers, at a time when the world is still learning to navigate in a post-pandemic new normal. As IASIR president, I welcome the relationship and stand committed to CAPSI and the Indian government to assure a smooth implementation and continued support.

There is no greater time than now to tear down walls, break barriers and surge ahead.