“On the way, we are bracing ourselves to deal with Biological threats” – Chairman CAPSI 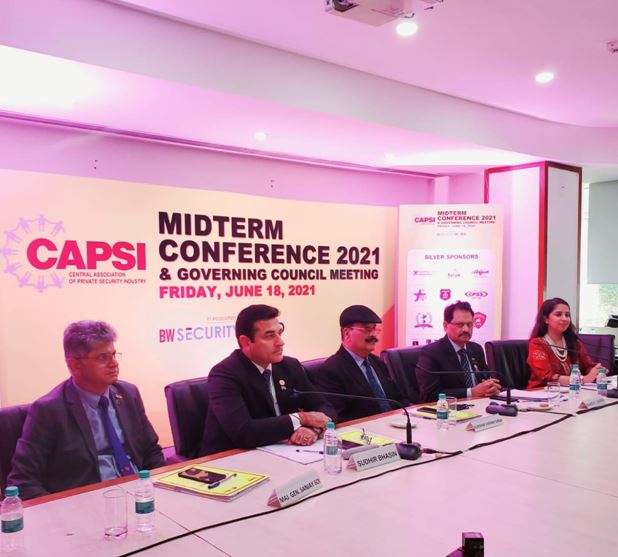 Central Association of Private Security Industry (CAPSI) held its Midterm Conference 2021 and their Governing Council Meeting virtually on 18th June 21 in association with Businessworld. Anurag Batra, Chairman and Editor in Chief of Businessworld was the Guest of Honour.

He shared his vision of raising the standard of PSI to global level.  He highlighted that the number of MoUs that CAPSI has signed so far is the testimony of initiatives in right directions.  One of such MoUs was signed with Security Institute of UK which is one of the largest security institutes in the world. CAPSI had joint event with them on Terrorist Threat or Protect Duty Law of UK. The chairman highlighted that all of them have faced the threats of COVID.  It is high time that we understand this type of biological threats to humanity and economy, and PSI must take appropriate measures.  As a step forward, a MoU was signed with ISIO of USA to introduce security protocols against biological threats. MOU with SASA enables entry of CAPSI in African continent, and the similar with Rashtriya Raksha University (RRU), Ahmedabad enables collaboration for high level of security courses and training.  He mentioned another proud moment when delegation of CAPSI represented India in Round Table on Compliances organised by DCAF in Geneva.

The chairman highlighted yet another major milestone reached by CAPSI was Star Rating for PSA, vision for which was set by him in 2013. CAPSI and QCI jointly launched the scheme in Feb 2019.  Due to continuous follow up, GEM has now made Security Star Rating a requirement before uploading a tender. The chairman said, “This is like a dream come true.”  Certification process for Star Rating is very tough. Both QCI & CAPSI have put in a lot of efforts in identifying and creating the basic tools that would be essential for the certification. QCI has provisionally granted accreditation to two certification bodies – they are TQ Services. apart of Tata Projects Ltd, and Quality Austria Central Asia Pvt Ltd. (QACA) –both organizations are of international repute.   There has been very good response from PSAs and the process for implementing Security Star Rating for PSAs is going on.

He mentioned that a number of meetings of Central Committees were organised since Feb. The Committees contributed immensely by recommending positive changes in respective fields for the benefit of PSI.  The reports were circulated with members in Mid Term Conference.  The chairman complimented the efforts by the committees.  He also mentioned one major achievement that is ‘one nation one contract,’ and a model contract was shared with all members.  He also complimented Legal and Conflict Resolution Committee for finalising this document.

The chairman highlighted that during second wave of COVID, CAPSI took the challenge and a number of initiatives for the welfare of PSAs.  Notable among them was to approach central as well as state government for the priority in vaccination for the security personnel.  Oxygen concentrators were bought for the benefit of members.  A toll free number was activated; sticker was issued to our people to enable their hassle free movement from and to the place of duty.

Chairman thanked the Governing Council, NOBs and all members for the whole hearted support to CAPSI and exhorted them to continue to support the initiatives by the CAPSI.

Mahesh Sharma presented the Mid Term Report which was already shared with the members.  He brought out that the security industry has done a lot especially during COVID time and whole nation now recognises the contributions of PSIs.  He asked the members to be united and help each other.  The state chapters are doing good works in representing CAPSI to controlling authority.

Dr Anurag Batra complimented the chairman for his selfless contribution which is the true reflection of a great leader, and said that the last eight weeks have been very tough for every one due to COVID. He endorsed the views of the chairman that every small can become big, and  spoke of biological threat and economy to brace itself for that.

As presented at the forum, state chapters are doing yeoman’s work for the PSI in their respective states  — especially during COVID times, they went out of their ways to help security personnel and remained united.  Most of the states had excellent views of controlling authorities of their respective state.  A couple of states mentioned of problems in renewal of licenses.  Chairman mentioned that state chapter presidents must coordinate with respective controlling authority and in case problem persists, approach CAPSI which has always promptly taken up case to appropriate level.

Sudhir Bhasin, National Vice President, CAPSI spoke on COVID security management by PSAs.  The subject was very live – more or less everyone was affected with the impact of COVID in last one and half year.

The subject Common Service Level Agreement was presented by D P Singh, State President, CAPSI Bihar Chapter.  It was found that the contract for PSI is very important and it was noticed that the service provider i.e., PSA was at receiving end – with the vision of the chairman to have ONE NATION ONE CONTRACT.

Vikram Mahurkar, Vice Chairman, CAPSI covered security guards as first responders. He highlighted that end users feel that the security guard employed by him is known to all individuals.  Whereas the service takers need to understand that the guards need to be trained for specific tasks in particular trade.  He shared the example of oil or chemical industry, where fire cannot be handled by a normal guard.   The risk involved is huge and the security personnel have to understand first how to prevent and then how to respond to it in an appropriate manner using correct type of fire extinguisher and equipment.  The service takers have to pay accordingly.

C Pal Singh, Hony Director General, CAPSI covered the Security Guard Welfare Project. Welfare of the staff is one the major facets of man management of any organization. He brought out that housing and benevolent fund are two major issues which can be taken up on priority – the view was endorsed by a number of members who said that such a fund helps raise motivation level and retention of staff with the company.  Chairman asked C Pal Singh to use his past experience for creating such funds for the benefit of PSI.

Maj Gen Sanjay Soi (Retd), Hony CEO, CAPSI presented Biological Threats – Role of PSAs & Service Takers.  He highlighted that the new challenge for PSI has emerged in the form of biological threats.  The devastating effect of this threat has affected all facets of life.  Its effect on personal as well as national economy has been devastating.  Loss of revenue for business due to less foot fall has been huge.

CAPSI has signed MoU with ISIO of USA to introduce security protocols against biological threats.  The business premises can be assessed that all COVID protocols are being followed and certificates should be issued.  This will convey message to visitors that they are safe to visit the place.  PSI has onerous responsibility to take it forward and ensure safety of their staff as well as their area of responsibility.

Moving Forward VV Katti, President, CAPSI conveyed his vision statement for CAPSI which covered variety of subjects.  He spoke on bio security highlighting different types of threats and biological threat is the latest one.  PSI in India assisted the government in checking the spread of COVID.  He highlighted loss of revenue to businesses.  PSI is ideally suited for implementation of COVID protocols and CAPSI and ISIO jointly can deliver results.

Speaking on guards’ welfare he covered proper pay and allowances, training and regular upgradation.  Speaking on premier rates, the president mentioned that Star Rating will help in getting better rates. Another important aspect he covered was insurance cover for PSAs.  Guards are already covered.

CAPSI is now working on medical insurance cover for supervisors and above for all PSAs.  Because of volume it will be beneficial for all.  He also mentioned that CAPSI has been taking up cases with the Ministry of Finance through MHA and directly for resolving the issue of RCM on GST.  The matter is being pursued vigorously.

3 Thoughts to “PRIVATE SECURITY GETTING READY FOR BIOLOGICAL THREATS”