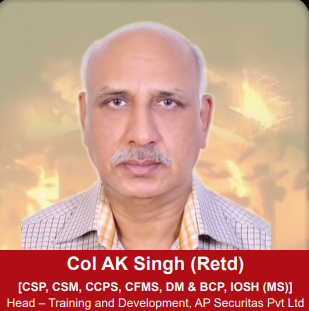 Fire safety assumes huge significance equally for a corporate and/ or a small enterprise. It begets proportionate impact on the businesses, and any lapse therein brings overwhelming bearing on the safety of personnel (loss of life), property, and data etc., and ultimately on the business of both entities. Majority of researches hitherto on the fire incidents that occurred across all business domains affirm that the ‘first responder’ plays the key role in diverting and mitigating the impact of a fire incident – whether the person is a security guard or an employee, or anyone else for that matter. His/ her prompt and correct reaction to the detection of fire may save many precious lives, and assets worth billions, while an erratic and/ or panic ridden reaction may cause loss of similar metrics. The compliance of building parameters as defined in the NBC 2005 in terms of the installation of fire detection and suppression systems within the building and in a premise also plays an equal role.

There is a large number of fire incidents where the AP Securitas security guards have taken prompt and courageous actions to save lives and properties. They brought us laurels and appreciations from across the clients.

We discuss one of the cases here:

The branch office of one of our corporate clients is housed on the 4th and 5th floor of a five story building, called Bhanot House in Yusuf Sarai, New Delhi. While the branch manager and his staff operate from 4th floor, the advisors and others function from 5th. The aforesaid corporate client got the fire panel installed on both floors for fire detection and subsequent alarm. Their office working hours are from 09.30AM to 06.30PM, and the employees strength is approximately 150 including advisors/ agents. They observe every Wednesday as the ‘lights out day.’ Two security guards are on duty at a time in the day – one at each floor. There is no security guard at night after office closes in the evening. The building security at night is assigned to another security provider.

At about 06.30pm on the fateful day of 17 July 2019, when most of the employees had left and it was time to close the office, the branch manager instructed Uday Singh, who was the security guard deployed at 4th floor, to take a

round of 5th floor and switch off all lights, and ensure that all employees had left. Mr. Angad who had left earlier that day due to some urgency at his home was the usual security guard at the 5th floor. While Uday Singh was climbing the staircase, he heard a hooter alarm. He rushed upstairs to the fifth floor where he found the training room was full of smoke up to the ceiling. There was a short circuit in the LED light mounted on the ceiling. The smoke had already spread through ceiling to the adjacent Server Room. He took prompt response, switched off the mains immediately and shouted loudly – FIRE! FIRE! FIRE! – to inform the branch manager. He dialed 101 to inform Delhi Fire Services of the fire in the premise, picked up the fire extinguisher installed on the 5th floor and entered the training room where the fire was in full blaze by then. Notwithstanding the risk to his own life, he used the fire extinguisher and doused the fire. Further, he proceeded to the Server Room which was locked by a glass door, broke the glass door and extinguished the fire using a second fire extinguisher. This is how he was able to save vital data stored in the server, and loss of other assets of not only premises of our client but of the entire building. The branch manager and the admin are the eye witness of this act of our brave security guard. 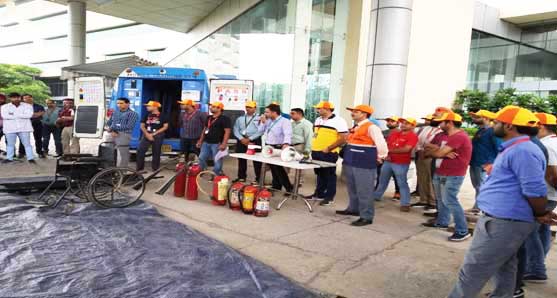 This is just one incident which has been illustrated here but there are several others. For instance, two similar incidents took place in a premise of Sujan Vihar, Sector 43, Gurugram where the AP Securitas security guards saved the flat from fire in 2017. The fire broke out there when the owners of the flats had gone to their offices. Later, the concerned security guard was awarded cash prize by the RWA. In another similar incident in 2018, our security guard Buddha Prakash showed his dutifulness and saved the head office of another client from devastation due to fire located at Rattan Square building near Burlington Chowk, Lucknow.

Following vital lessons can be drawn out of these incidents:

The score of high profile fire accidents during this year in Delhi-NCR and elsewhere in India has drawn the attention of the concerned authorities that resulted in the tightening of rules and regulations. However, the continuous pressure needs to be kept to ensure compliance. We in the APS Group take pride to state that our clientele has benefitted at large and ensured their premises are safe and secure through the dedicated team efforts of APS training team by ensuring regular fire safety inspections, fire safety audits, conceptualizing of building evacuation plans, ERT training, and mock drills at their premises. We share these case studies during the training sessions at client sites to enhance motivation and awareness by example. We train to deliver even beyond the call of duty.