The rugged build quality of the new Invictus PTZ camera from UK CCTV manufacturing company, 360 Vision Technology, has been proven in the field during a recent road traffic incident in north London, which provided a real-world test for the camera and its ‘Attack Detect’ response feature. 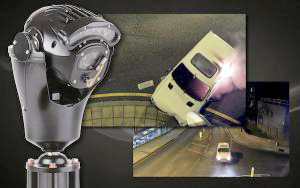 Built into each Invictus camera, 360 Vision’s ‘Attack Detect’ automatically responds to a detected increase in camera load (such as the camera being hit by an object). On detection, the camera’s direct-drive pan/ tilt mechanism is instantaneously disengaged to prevent damage to the motor drive. A self-check routine then establishes if the camera has altered its direction of view during the attack, and an automatic re-initialisation is triggered – returning the camera to its last known position prior to the impact.

The benefits of Invictus’ Attack Detect response to system operators is that post-attack, the camera always returns to its correct field of view, prior to being forcibly moved. This means that vital evidential footage will continue to be captured, and without the need for operator intervention. The feature also ensures that all camera-preset positions remain intact, vital to avoid disruption to the daily running of the system due to inaccurate preset positions.